Quran: “Each verse is like a date: the more you chew it…”

Daily we open our inbox in Facebook, in Mobile, etc. and read the messages sent by our friends and relatives. But how many time do we open the Q’uran and read the Message sent by Allaah Subhanahu Wa Ta’ala? 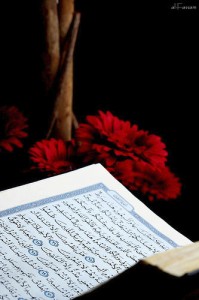 These are great reminders for us:

1 – The Messenger of Allah said:

“al-Walid bin al-Mughirah (a polytheist) came to the Messenger of Allah. The Messenger of Allah recited the Qur’an to him, and al-Walid seemed to become affected and softened by it. Abu Jahl came to know of this, so, he came to al-Walid and said: “Don’t you see that your people are collecting charity for you?”

Abu Jahl replied: “So that they can give it to you, as they see that you went to Muhammad to get some of his food.”

al-Walid said: “Quraysh knows that I am of the wealthiest of its sons.”

Abu Jahl said: “So, say to Muhammad something that would convince your people that you oppose him.”

al-Walid replied: “And what can I possibly say? There is not a single man who is more knowledgable of poetry or prose than I, or even that of the Jinn, and by Allah, what he says bears no resemblance to these things. By Allah, what he says has a sweetness to it, and a charm upon it; the highest part of it is fruitful and the lowest part of it is gushing forth with bounty; it dominates and cannot be dominated, and it crushes all that is under it.””

“I heard the Messeger of Allah recite ‘at-Tur’ in the Maghrib prayer, and when he got to the verses {“Were they created by nothing, or were they themselves the creators? Or did they create the heavens and the earth? No, but they have no firm Belief. Or are with them the treasures of your Lord? Or are they the tyrants with the authority to do as they like?”} [at-Tur; 35-37], my heart wanted to fly from my body out of awe.”  [‘Tafsir Ibn Kathir’; 4/309]

“If our hearts were truly pure, we would never get enough of the Words of our Lord, and I hate that one day passes with me not looking in the Mushaf.”   [‘al-Bidayah wan-Nihayah’; 7/215]

“‘Ikrimah bin Abi Jahl used to press the Mushaf to his face and cry, saying: “The Book of my Lord! The Words of my Lord!””  [Reported by ‘Abdullah bin al-Mubarak in ‘al-Jihad’; # 56]

“Verily, each verse is like a date: the more you chew it, the more of its sweetness is released.” Abu Sulayman heard this and commented: “True. It is the case with one of you that if he begins one chapter of it, he wants to read it to the end.”  [‘al-Hadith fi ‘Ulum al-Qur’an’; p. 70]

Should We Read Al Qur’an With Understanding??

“And We have indeed made the Qur’an easy to understand and remember, then is there any that will remember (or receive admonition)? “  (Qur’an, 54:17)

Since none of us want to be misguided, it is paramount not only to read or recite Quran, but to understand and implement it in our lives as well.